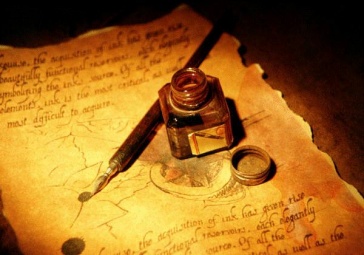 The reading & writing system allows you to open a 'writable book' causing the picture of a real opened book to pop-up. This picture contains the text of the book item, properly outlined on the pages.

It is also possible to write books, this is accomplished by acquiring an unlocked book and opening it. When you right click on the book a new window will pop up allowing you to start editing, or to select some other options.

Writing is very straightforward. The editing system does not require you to memorize any commands to mark-up the text manually, such as bolding, underlining, and others. One command is crucial however:

Typing the command above indicates that the following text is to be put on page 1 of the book. A page command must be put at the start of every new page. The reading system will then format the book automatically. Followup commands increment logically:

It is also important to remember that the commands must be in lower casing, and may not contain any spaces. Do not forget the " : " after "page" and before "1", it can be easy to miss in the example commands the system provides.

The writable books and libraries have a character limit of 10.000. If you go over this limit the exceeding portion will not be saved and is permanently lost. There is an option available to count the amount of characters in a work.

In addition to writing in common there is the command <language:> command which marks your text as being written in a certain langauge. For example: <language:elven>The text after this command will be written in the specified language. If you want to stop using a language use the command: <language:common>. There is no fixed amount of languages that can be used per page, though your character can only write in languages he knows.

If a reader does not know the language on the page that part of the text will appear as language appropriate gibberish to him.

At several location around the Sword Coast libraries can be found. The librarians in these places will allow you to browse their local selection of books, add new ones or remove works you already added.

In essence the Libraries, Readable books and Writing of books functions like an in-game Wikipedia.