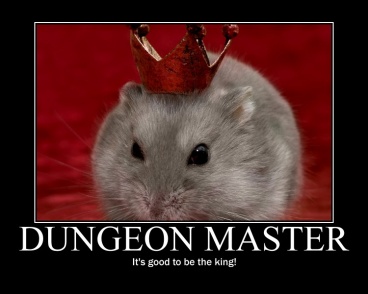 The Dungeon Master Team (DM's) are responsible for narrative flow, creating the scenario and setting in which the game takes place.

They maintain the roleplay pace and provide dynamic feedback. In storyteller role, a Dungeon Master is responsible for describing the events of the D&D game session and making rulings about game situations and effects based on the decisions made by the players.

A Dungeon Master serves as the arbiter of the rules, both in teaching the rules to the players and in enforcing them. The rules provide game mechanics for resolving the outcome of events, including how the player's characters interact with the game world.

The DM team consists of anonymous individuals that leave their player accounts behind when they ascend to their new glorious office. (see picture *wink wink*) They are presumed to be neutral and incidents of favoritism or other absues of power are dealt with by the DM Team Leader and the staff.

Dungeon Masters will regularly throw events for players and help them play out their character. These events may be requested in advance or spontaneously held. The emphasis of DM activity is to faciliate and enhance player generated roleplay. The Dungeon Masters are not charged with directing roleplay or generating it for the players. As a consequence it is the actions of players which will affect the world. Player responses, solutions and in-action shape the persistent world.

This dimension of player influence over the game world is vast. Player characters have historically possessed political offices, earned noble titles, sacked villages and citadels, and determined the outcome of at least two major wars.

Examples are the Amn-Baldur's Gate Conflict of 1347-48 DR, the Illithilich Conflict of S'shamath in 1348 DR, as well as the later Black Orc conlict in 1349 DR. This lattter conlict resulted in the sack of Triel and the reestablishment of a strong Zhentarim presence based in Darkhold. These wars involved battles as well as infiltration, subterfuge, the planning of strategy and diplomacy. All lead and determined by player initiative.

Any player can thus shape the future of the server, provided he roleplays to that end and is committed to his goal. For more on player influence please see the Server's Timeline.

New DM's are chosen by the team itself, players can typhically apply by sending an application to the DM Team group via private message. In rare cases they may also be invited.